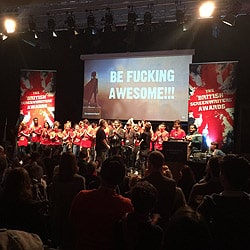 In September 2018, something magical occurred. The place was Regent’s University, the event – the London Screenwriter’s Festival. Dreamers and creatives, introverts daring to explore, and extraordinaryverts daring us all to dazzle. Those and more converged. The type of folk who were told at school they had bags of potential if only they would join the land of the living and stop gazing out of the window.

Like wizards at Hogwarts, they gathered from across the globe for a special event. Muggle life was forgotten for a few days as folk left doubt at the doorway, sallied forth and dared for a moment to live the possibilities. 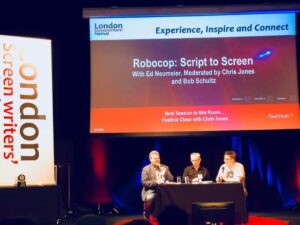 Just like the normalverse, queues formed naturally outside auditoriums and at the refectory. This is where the first miracle occurred. Unlike the normalverse, people in the queues, turned, looked their fellow human beings in the eye and introduced themselves. Strangers actually chose (voluntarily!) to sit next to strangers. Pleasantries were exchanged, friendships formed.

These weird people showed genuine interest in each other’s ideas. Unlike the conversations ‘out there’ which inevitably drifted towards Aunt Edna’s arthritis or the argument Cecil had with his boss at work, these stayed focused on stories, characters and ideas. 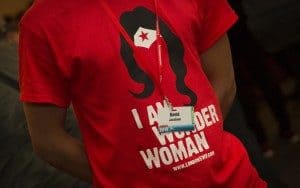 The second marvel occurred when Chris Jones took to the stage, the inspiring music kicked in and we were all encouraged to stand and strike our Wonder Woman pose. The room became imbued with power. We were no longer individuals trying desperately to fumble our way like strangers in a strange land. We were not alone; we were a clan!

What followed was three days of the miraculous for this clan. Mighty spells were woven, friendships formed, seeds planted and fears conquered. I myself experienced my own miracle. Entranced by Joey Tuccio’s mesmerising session on pitching, I found my hand raised itself in the air when he asked for a volunteer. Before a full room of people and a camera recording my every utterance, I found myself pitching a project I’ve never pitched before, the first draft so recently finished that the proverbial ink was still drying on FADE OUT. 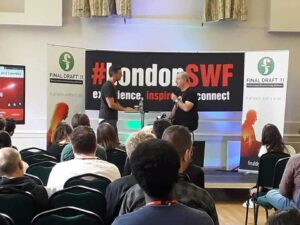 Over the next couple of days, not only did people tell me how well I did, but some approached me and inquired if they could pitch… to me!

Here I noticed another miracle, as the light dawned on their faces that they actually had what it took to pitch inside them all along; they just needed a gentle nudge; a touch of enthusiasm. All too often I’ve heard writers say they are not ready to pitch. Not because their material isn’t ready, but they don’t feel ready. They let fear win. Some people treat fear as F*ck Everything And Run, but at LSF they were Facing Everything And Rising, even if this was just pitching their ideas to fellow writers. It was another step in the right direction. 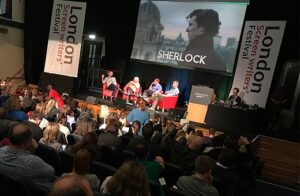 I’ve since returned to the normalverse. Muggle life has resumed. A state of depression did linger for a while, but the seeds I’ve planted have begun to sprout a little. And the magic from LSF continues to fuel my creations.

It shields me from regular life and I hope this magic cape will protect me until spring 2020 when I can recharge it with more miracles at the 10th anniversary of the London School For Gifted Beings, otherwise known as the London Screenwriting Festival. 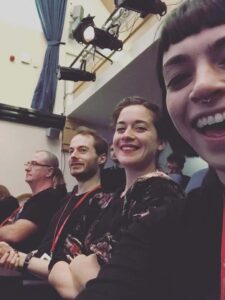