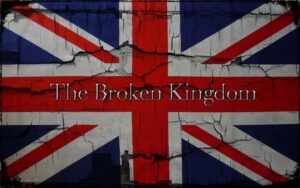 In 1605 Guy Fawkes attempted to blow up the English Houses of Parliament. It was part of a larger plot by Protestants to overthrow the monarchy but he was caught and tortured until he gave up the names of all his co-conspirators. He leaped to his death just before he was hung, drawn and quartered. King James I ordered the entire country to celebrate this failed coup with bonfires and thus, a national tradition was established – November the 5th, bonfire night, one that is still celebrated to this day.

But what if Guy Fawkes had succeeded? What effect would this have had on the development of the United Kingdom and the British Empire? That was the premise Mark pondered and in doing so, he imagined a new alternate history from 1605 to 2018.

By 2018, it is not a United Kingdom but a broken one. With resources dwindling and a tough religious regime in force to control the population, it has a become an isolated island. The short script is set there. It focuses on a French-American business man visiting England on his first trip outside of his own country. He truly feels like a stranger in a strange land. Matters take a turn for the worse when he accidentally utters a word that has recently been banned. Facing incarceration in the Tower, he is forced to go on the run with a couple of eccentric Scottish freedom fighters.

Partially inspired by Brexit and V For Vendetta, The Broken Kingdom is a dark comedy, which mixes serious elements with funny, yet tragic situations.