Are you after sci-fi, action, horror, drama, fantasy or comedy scripts? The scripts featured here are available now for production. Please contact Mark if interested in these, or would like to discuss any writing projects. 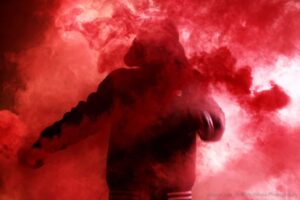 When a crimson smog covers the world and removes the impulse control from anyone it touches, an unpopular young developer with borderline personality disorder is trapped with her colleagues when their true selves are revealed and one among them is a killer.

Winner of the 27th Euroscript Screen Story Competition.. If you are interested in reading the full screenplay, contact me. 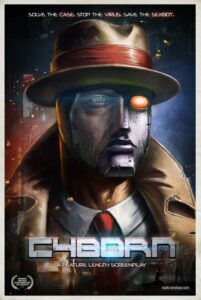 Braxx Dryden, Cyborg Private A.I. is working his last case. Infected with a tekvirus that’s deleting his memories, he must team up with a sexbot operated by his estranged daughter (#awkward)to solve all his cases and find a cure before he shuts down. 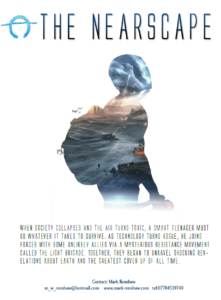 In the not-too-distant future, Earth’s hidden masters initiate a plan to decommission the planet, three unlikely heroes who are just trying to survive the unfolding chaos are guided by a mysterious resistance movement called The Light Brigade toward unearthing an ancient, global conspiracy.

A jaded correction officer transporting a busload of restrained inmates must choose whether to defend the prisoners she despises when they are attacked by creatures with a twisted sense of justice.

On a whim and in need of healthcare, three geriatrics attempt a bank heist. With no experience, no clue and no bowel control, their chances are slim, especially when they encounter an off-duty cop.

The Tale of Tin Can Kade (Western – 5 pages)

A couple of wannabe serial killers haul a body through the hills to participate in the annual Slayfest competition when they encounter a hiker with murderous intentions.

Semi-Finalist in the Killer Shorts Contest.

A laboratory assistant who uses humour to mask a lifetime of abuse finally snaps and decides to end it all in spectacular fashion.

There’s Something Inside (Sci-Fi – 3 pages)

A strange creature seeking shelter for the night finds itself 20,000 feet in the air on an airplane wing with one passenger inside bent on its destruction.

When an early-generation android takes her pedroid dog in for repairs, an accident turns her world upside down and reveals her entire existence has been a lie.
Click here to read it.

A man wakes up from a virtual life to find the real world a complete nightmare where humans are used for experimentation and food. He must escape from the labs while avoiding some very familiar faces.

The Way Out (Experimental – 4 pages)

What drives a person to commit suicide? This experimental short attempts to delve into the mind of a man contemplating the ultimate way out, the horrors he endures, the bleakness and a ray of hope to those who just hold on a little longer.

When all the planets in the solar system align with the sun, a father enjoying a day out at the beach with his daughter is transported to a realm of suffering and given a glimpse of his own personal hell.

Severally damaged and pursued by an angry mob, an android uses a set of dice to help him select memories to relive before he runs out of power.

Set in an alternate timeline in which Guy Fawkes blew up parliament and overthrew the English monarchy, on its anniversary in 2018, a French-American businessman finds himself on the run with Scottish Freedom Fighters after he inadvertently commits an act of heresy.

A university student working on a thesis about fear, stumbles across a technique for identifying dangerous individuals. Her latest experiment takes a lethal twist, when it becomes apparent her work is gaining the wrong type of attention.

On a corporate-controlled automated highway of the future, one family is about to find out the real price of progress.

Winner of a ‘Top Pick’ award in the Reel Writer finals

A troubled young woman seeking answers about her dark past discovers a magic software app that allows her to make wishes comes true, but at a price – each wish costs her a fraction of her soul.

Finalist in the 13horror.com film and screenplay contest

Surviving in a bleak world, a young man must seek shelter by 5:30 PM every day to avoid mysterious entities which seem to be searching for him.  A mishap results in him being stuck out in the open at the worst possible time.

A teenager discovers he’s inherited ridiculous superpowers but before he can master them, he encounters his father’s famous arch-nemesis.

A kidnapped women must unleash a dark, deranged personality she has kept locked, deep inside her mind since childhood, if she is to stand any chance of surviving.

The Man Behind The Curtain (Horror – 4 pages)

A child is haunted by a mysterious man behind a curtain who no-one else can see; a shadowy figure who wants to destroy his childhood by bombarding him with horrific subliminal images.

Mankind has fallen, sick and weak they rely on machines to survive. The story of their downfall is told via a unique perspective; a Pale Man watching TV on a holographic array. The programs he scans are chosen by his mind and linked subconsciously to the crisis.

An office worker returns home after a long day and embarks on a rather surreal journey in a faulty elevator to the 99th floor.

A student at Cornell University in New York carries out the world’s most comprehensive online search for evidence of Time Travellers. She finds a positive match; on Twitter.