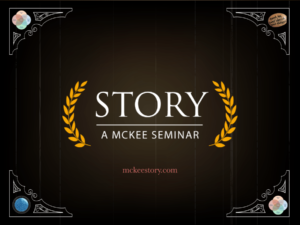 If you were passionate about becoming a great jazz player, would you prefer to learn from a seasoned veteran with vast of experience in every aspect of the jazz business, or a music teacher who enjoys jazz? It’s a no brainer really. So when Mark had the opportunity to attend a story seminar by the legendary Robert McKee, a man with decades of experience of the stage, page and screen, he jumped at the chance. Here’s his report.

What is Robert McKee really like?  Initially he seemed like a stern taskmaster who does not suffer fools gladly. There was a grim warning of no interruptions, threats of on-the-spot fines for mobile phones and an outline of a gruelling schedule. Basically the type of no-nonsense approach to learning I remembered from the stricter teachers in my school days, but also the classes I gained the most knowledge from.

As the lectures commenced he would quite often interject with his own jokes, stories and personal opinions that where honest, direct and refreshing. I loved this. Glancing around at my fellow delegates, I observed most were laughing and nodding along but I noted some were tight-lipped with arms crossed. He’s not going to be everyone’s cups of tea in a world were some are looking to take offence at every opportunity.  As Robert himself said, he’s not there to make you love him; he’s there to make you love the art.

By the end though, I realised the truth. Robert is not only a storytelling maestro, but underneath it all he’s a deeply sensitive, empathetic man and a hopeless romantic.

What sort of peeps attended? There were a diverse cast of manz and wiminz or all ages, shapes, and diversities from all over the globe. Chatting in the breaks, I discovered a range of folks from all aspects of the industry, from writers to directors, even publishers and those involved in sales.

So spill it, what’s the seminar all about?  STORY POWER! The history of story, from Gilgamesh to Guardians of the Galaxy. The structure of story from sequences to sub-text, the characters and emotions of stories; in essence what makes a good story and why.  Robert used hundreds of films as examples simply because these were the easiest reference points, but the entire seminar is aimed at anyone working on stories for the stage, page or screen.

On the final day, we took everything we had learned and applied it to a fascinating scene-by-scene analyses of the film Casablanca and its screenplay. For me, the course was worth it for this aspect alone.

Three days, eleven hours of study per day? Did you really need that long? He pointed out that the course used to be four days! But yeah, maybe he could trim it some more. Part of the reason the seminars are so long is that he goes off point quite often. I really liked this aspect though. It’s what made the difference between having a book read out loud and attending a compelling seminar. 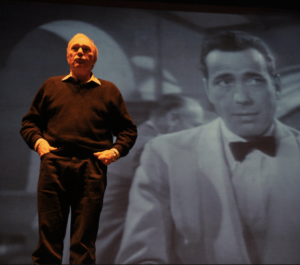 I would say day two felt very academic. There were a lot of diagrams and formulas about positive/negative charged turns, beats, emotions, moods etc. that I think could be condensed.  I felt myself drifting quite often this day. He even made a few comments about us all being tired and unresponsive. In the last couple of hours he discussed subtext and exposition. Everyone, I included, sat up and paid more attention, yet these aspects were over relatively quickly. I think if he looked at the course like trimming a bulky screenplay, he could make it a day shorter or at least make the days a bit shorter.

But what do I know? He’s been doing this for decades all around the world. And maybe a shorter course wouldn’t feel as complete; certainly the payoff on day three may not be as satisfying.

Did you learn useful stuff? Very useful. I had a work in progress I was constantly referring to in my mind.  By the end of the course, I had strong indications on where I was heading in the right direction and where I needed to tighten the ship. More importantly, it gave me inspiration and motivation.

I also learned aspects that were not explicitly mentioned. Most notable for me was how subjective subtext is. During the in-depth analysis of Casablanca, Robert would ask us what the subtext of the beats in each scene was. He’d get four or five different responses each time before finally suggesting what he believed was the actual subtext. However, it became apparent to me that some subtext is essential. If the dialogue is on-the-nose then the actors have nothing to draw from. I just doubt they would always pick up the subtext the writer intended without some sort of explanation.

Is he still relevant? Ooh, controversial question! Yes, of course he is relevant. We’ve been telling stories for thousands of years and I suspect we’ll be telling stories until the end of time. You just have to apply his teachings and life experiences to today’s industry and what is personally relative.

For example, when he recalled a writer working on draft 53 of a single scene, he was simply getting across the sheer amount of work that goes into creating a great screenplay. The story he told was from the seventies, the writer in question using a typewriter. I edit extensively using Final Draft. If I was using an old typewriter this would number a lot of drafts, maybe not 53 but certainly plenty. It’s just quicker in the modern era, I don’t have to throw away a piece of paper each time. 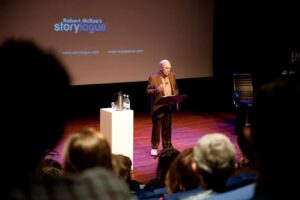 When he suggests writing a 200+ page treatment before writing a single page of the script, he does point out that studios don’t read such monster treatments these days and a ten-page treatment (or outline as he calls them) is sufficient. However, in his experience the best of the best have created their best work when they’ve written, what is in effect, a novel without dialogue version of the story first.  I have to respect that. Such effort is currently beyond my means but I agree with what he suggests. If I want to produce my best work, this is the amount of effort required.

There were also contradictions. Robert stressed at one point that writers should not include direction for actors in the scripts. I strongly agree with this but then later we use the script of Casablanca as an example of a perfect story. This is a script with extensive direction for actors. However, I know from experience that for every rule or good advice there’s successfully produced scripts out there that bend or break such rules.

Any final thoughts? Yes, I’d like to thank Robert McKee for such a wonderful and insightful experience. But I’d also like to have sterns words. I’ve had the song, “As Time Goes By” stuck in my head for days now! 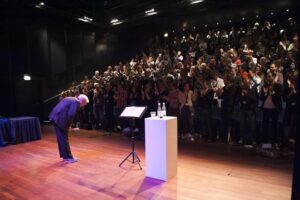