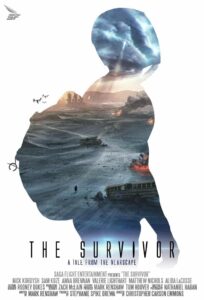 A new sci-fi film has been added to the Produced & Published section. The Survivor: A Tale From The Nearscape, is the third short film written and produced by Mark Renshaw in collaboration with director Christopher Carson Emmons, Producer Tom Hoover and Al Lougher.

Launched online on August the 16th, the Survivor has already knocked up some awards, winning Best Sci Fi at and both the Top Shorts and Festigious film festivals.

In a post-apocalyptic world where the air is toxic to breathe and oxygen is a precious resource, a young boy embarks on a perilous supply run to obtain water and medicine for his ailing mother. With just his toy robot as a companion on his journey, he faces many obstacles, but the real danger is waiting for him back home.

This short film also serves as a proof of concept for a TV series Mark is developing called ‘The Nearscape.’