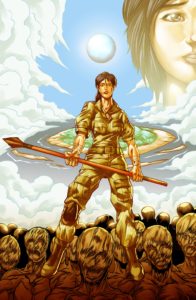 A new short script has been added to the scripts page. This one, is a Korean martial arts story with a twist!

Atoll’s Edge is the tale of a glorious battle fought on a distant land. A Korean soldier finds herself washed ashore on a strange island bathed in the warmth of two rising suns. Around her neck is a set of dog tags with the Korean symbol for the name Yuna.

She explores the island and encounters a pulsating orb inside a large building at the center of a mysterious, abandoned village. An encounter with a faceless demon that is drawn towards the orb ends in a fight, one in which she is victorious.

As time goes by, an increasing number of demons arrive at the village to do battle with the sole defender.

What is the orb and why are these demon’s so intent on destroying it? Why has this soldier been chosen as it’s protector? What the heck is going on?

All will be revealed